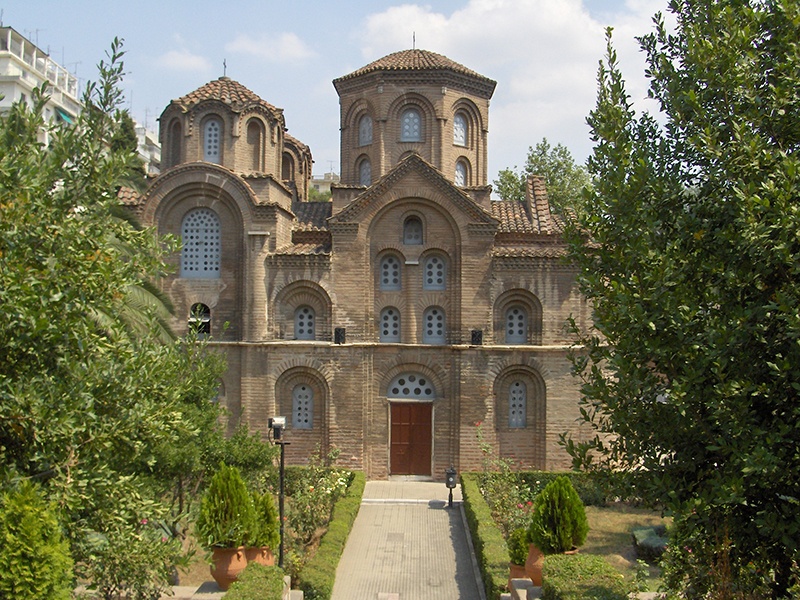 Grand Tour Greece is covering the most important ruins of ancient Greece and Byzantine Greece and showing the biggest part of mainland Greece countryside. The ruins of ancient Mycenae, Epidaurus, Olympia, Delphi, ancient Dion, Pella and Vergina and the famous monasteries in Meteora are worth visiting and will leave you with good memories. You visit Thessaloniki, the second biggest city of Greece with famous archaeological and Byzantine museums.

Greece through the centuries will unfold before you on this 7 days tour. 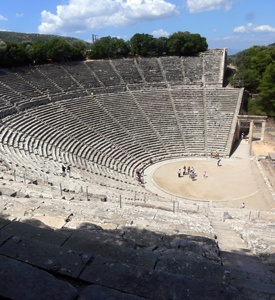 Drive along the coastal road of the Saronic Gulf you pass Daphne and Eleusis and arrive at the Corinth Canal, which connects the Aegean Sea with the Ionian Sea (shortstop). Drive on to Epidaurus to visit the Theatre (4th century B.C.) famous for its astonishing acoustics. Continue to Nafplion, the picturesque town nestling at the foot of a cliff crowned by the mighty ramparts of the Palamidi Fortress, the first capital of Greece, for a sort stop. Drive through the fertile plain of Argolis and arrive at Mycenae , the legendary Homeric city of the Atreides – the city ‘rich in gold’ of the ancient poets (visit the Lion’s Gate, the Cyclopean Walls, the Royal Tombs) and depart for Olympia, the cradle of the Olympic games, through the central Peloponnese area passing the cities of Tripolis and Megalopolis. Dinner and Overnight at Olympia.

Olympia was a sanctuary of ancient Greece,  known for having been the site of 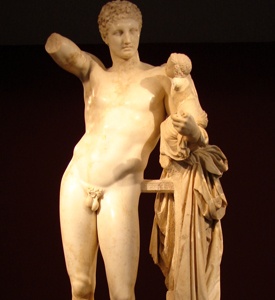 the Olympic Games in classical times, the most famous games in history.
The sanctuary, known as the Altis, consists of an unordered arrangement of various buildings. Enclosed within the temenos are the Temple of Hera (or Heraion/Heraeum) and Temple of Zeus, the Pelopion and the area of the altar, where the sacrifices were made. The hippodrome and later stadium were also to the east.
To the north of the sanctuary can be found the Prytaneion and the Philippeion, as well as the array of treasuries representing the various city-states.
Olympia is also known for the gigantic ivory and gold statue of Zeus that used to stand there, sculpted by Pheidias, which was named one of the Seven Wonders of the Ancient World by Antipater of Sidon.
Then drive on through the plains of Eliad and Achaia until the magnificent bridge which is crossing the Corinthian Bay from Rion to Antirion. Pass by the picturesque Towns of Nafpactos (Lepanto) and Itea, arrive in Delphi. Dinner and overnight. 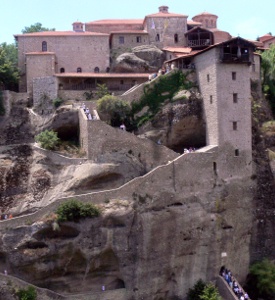 Delphi was the centre of Ancient World – the “Omphalos” (Navel of Earth) – whose prestige extended far beyond the boundaries of the Hellenic World.
On the slopes of Mount Parnassus, in a landscape of unparalleled beauty and majesty, lie the ruins of the Sanctuary of Apollo Pythios.
Visit the Treasury of the Athenians, the Temple of Apollo and the Museum containing such masterpieces of Ancient Greek sculpture as the bronze Charioteer and the famous athlete Aghias. Depart for Kalambaka, a small Town situated at the foot of the astonishing complex of Meteora, gigantic rocks. Dinner and overnight. 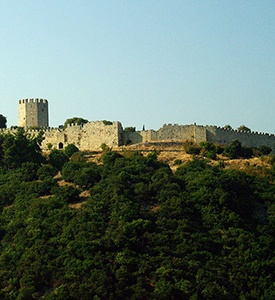 Visit the Meteora: perched on top of huge rocks, which seem to be suspended in mid-air, stand ageless Monasteries, where you can see exquisite specimens of Byzantine art. Depart from Kalambaka, drive through the striking plain of Thessaly and the Valley of Tempi, and admire the gigantic figure of Mount Olympos, the highest mountain in Greece and home of the 12 Gods in Greek Mythology. Arrival at Thessaloniki, the second largest and the most vibrant city in Greece. (Dinner and overnight) 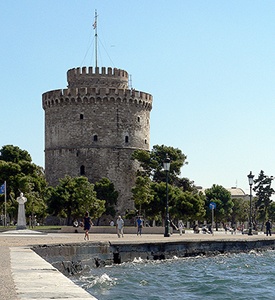 In the morning visit the city that throughout the era of the Byzantine Empire was the “co-reigning” city, second in population and prestige only to Constantinople. Visit unique monuments and feel the glorious Byzantine past in some of the oldest and most characteristic churches of the Christian world as well as in the Museum of Byzantine Culture, awarded by the Council of Europe’s Museum Prize for the year 2005. Rest of the day free, to enjoy time in the lively centre of the city. (Dinner and overnight)

Depart in the morning for a unique approach to historical Macedonia. First 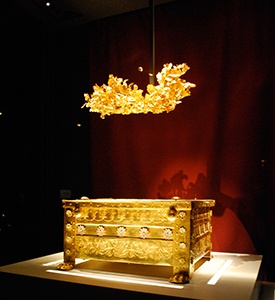 stop at picturesque Edessa where we see the town’s famous landmark, the Waterfalls. Then proceed to Naoussa, to a site of exceptional beauty and importance: Aristotle’s School, the picturesque site where the great philosopher taught ‘the doctrines of morals and politics’ to Alexander the Great and the Macedonian youth. Then drive to Vergina (ancient Aigai), to live the experience of a visit to the unique Museum, created in the Great Tumulus covering the royal tombs of Macedonia. See the astonishing findings from the tomb of King Phillip II, Alexander’s father, and feel the thrill of the greatest discovery of the 20th century. In only a few miles away is Veria (Biblical Beroea) to visit Saint Paul’s Bema, and then stroll through the old Jewish neighbourhood and the colourful market area. A walk in a city where past is present and around. Return to Thessaloniki. (Dinner and overnight) 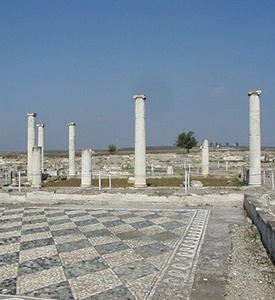 Drive to Pella, the capital of Alexander the Great. See the exquisite floor mosaics of the 4th century B.C. villas, in situ as well as in the new Museum. Then proceed and visit the Archaeological Park of Dion (sacred city of the Macedonians, at the foot of mountain Olympos). After the visit, we shall start driving south and through Thessaly, Lamia, Thermopylae (see the Leonidas’ Monument) and Thebes, arrive in Athens late in the afternoon.