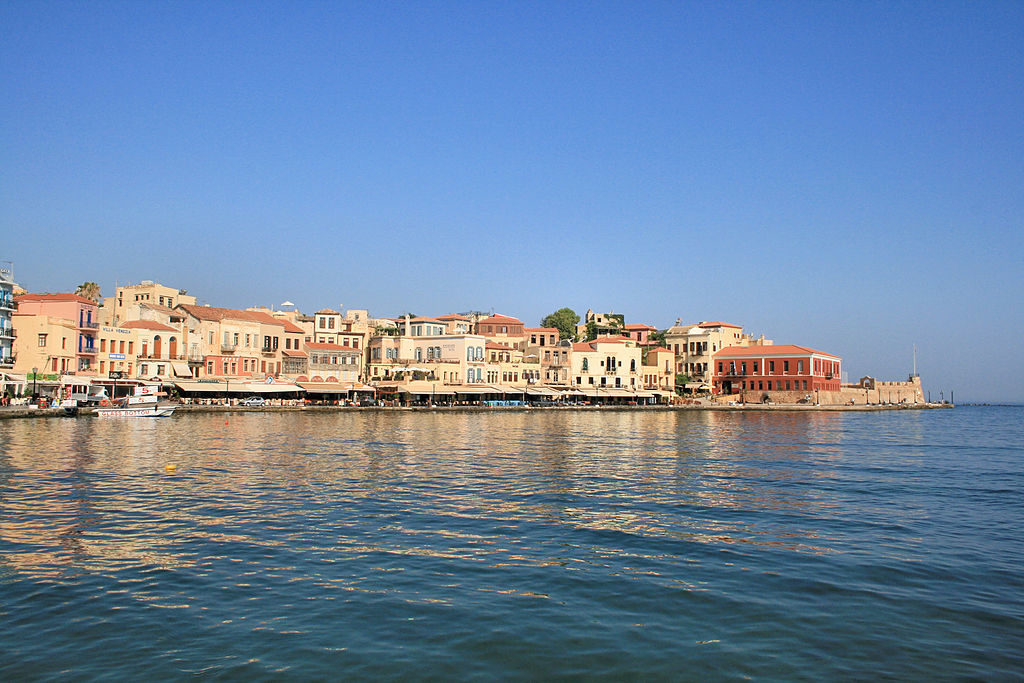 Chania Crete Island Travel Guide gives you handy information on the city and the interesting things you can do in and around, like organised tours and cruises, vacation packages and short walks.

Chania is situated in the western part of Crete. The landscape varies in Chania area; there are exotic sandy beaches with crystal clear seas, high green mountains, gorges, like the famous gorge of Samaria as well as traditional mountain and coastal villages.
It is worth visiting also the impressive monasteries of the area. Chania town is the most charming place and consists of the old and the new town. While the new town is just a modern city with no special interest in terms of beauty and architecture, the old town concentrates all the sights of Chania.
The Old walled town is an area with outstanding Venetian buildings from the 15th century. The town is centred around the pretty Venetian harbour. it includes areas such as the Venetian neighbourhood of Topanas at the western quarter with the finest Venetian mansions and Spiantzia north-east of the city with the church of Agios Nikolaos, which was turned into a mosque.
Other sights are the Firkas fort, which was built in 1629 and used as a prison for Cretan insurgents, the large walls of the Venetian fortress built in 1540, Kasteli on the eastern side of the port and Sindrivani square, which was a meeting place for intellectuals in the early 20th century.
In the old town of Chania except for the historical monuments, there are many excellent restaurants, bars and small shops. The grater area is full of fine hotels of all categories.
Chania area has many beaches where you can find lots of organised sea sports including sea diving. Also in many hotels, you will find sports campus and in those on the beach sea sports.
Chania is the site of the Minoan settlement the Greeks called Kydonia, Greek for quince. Some notable archaeological evidence for the existence of this Minoan city below some parts of today's Chania was found by excavations in the district of Kasteli in the Old Town.
This area appears to have been inhabited since the Neolithic era. The city reemerged after the end of the Minoan period as an important city-state in Classical Greece, one whose domain extended from Chania Bay to the feet of the White Mountains. The first major wave of settlers from mainland Greece was by the Dorian Greeks who came around 1100 BC.
The early Christian period under Byzantine rule (First Byzantine Period, 395–824 AD) and the rule of the Arabs, who called the settlement Al Hanim ("the Inn"), are not well documented. Under the Arabs, the Christian population was persecuted and moved to the mountains. The Byzantine Empire retook the city in 961 AD (Second Byzantine Period, until 1204 AD).
In this period the Arabic name of the city was changed into Greek Chania. Byzantines began to strongly fortify the city in order to prevent another Arab invasion, using materials from the ancient buildings of the area. By this time Chania was the seat of a bishopric, which would be known under Venetian rule as Roman Catholic Diocese of La Canea and later become the Latin titular see of Cydonia.
After the Fourth Crusade (1204) and the fall of Byzantium in the Hellenic area, Crete was given to Bonifacio, Marquess of Montferrat. He, in turn, chose to sell it to the Venetians for 100 silver marks. In 1252 the Venetians managed to subdue the Cretans but in 1263, their rivals of Genoa, with local support, seized the city under the leadership of Enrico Pescatore, count of Malta, and held it until 1285, when the Venetians returned. Chania was chosen as the seat of the Rector (Administrator General) of the region and flourished as a significant commercial centre of a fertile agricultural region.
Another important period for the city of Chania was the invasion and occupation by German forces during World War II. The British force that faced the German paratroopers during the Battle Of Crete in 1941, had artillery elements over the hill of Dexameni in the south of the city. These elements bombed the German forces in the Maleme airfield undetected until they ran out of ammunition.
George II of Greece stayed in a villa near the village of Perivolia outside Chania before escaping to Egypt. Part of the city was bombed and a significant proportion of the area's population was either executed or imprisoned due to participation in the resistance against the German rule. The Jewish community of Chania was also eliminated during the German occupation. Most of them were transported off the island by the Nazi occupiers in 1944. Tragically a British torpedo sank the ship Tanais, which was carrying most of the Jewish prisoners.