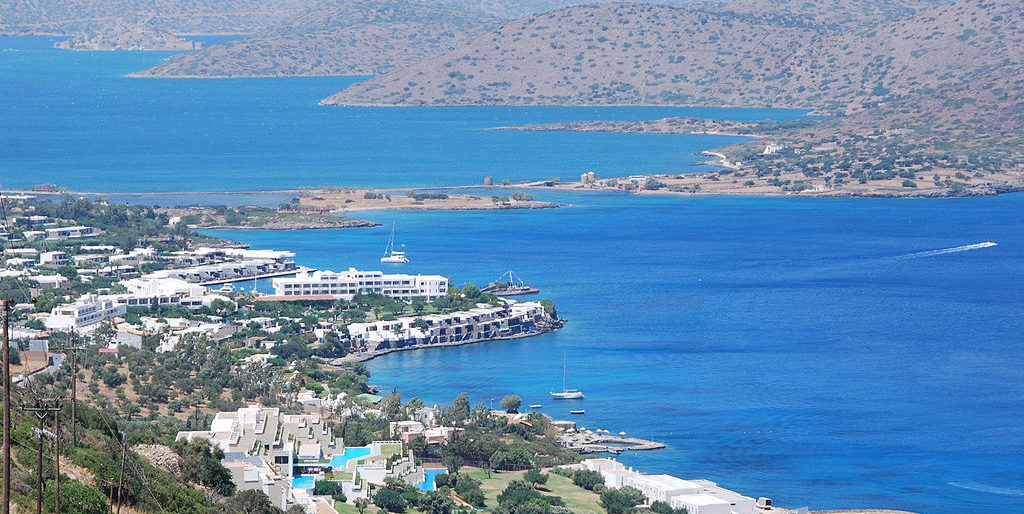 Elounda - Agios Nikolaos Crete Island Travel Guide gives you handy information on the city and the interesting things you can do in and around, like organised tours and cruises, vacation packages and short walks.

Agios Nikolaos, capital of the Prefecture of Lasithi, is one of the most highly developed tourist towns in Greece. It lies to the west of the Mirabello bay. The sea in Agios Nikolaos is superb and the surrounding area of the city is noted for its sandy beaches and beautiful bays. The landmark of the city is a small lake, known as "Voulismeni" that is located in the centre of the city, at the foot of the cliffs. Its shape is circular with a diameter of 137m According to the mythology, the goddess Athena used to take her bath in this lake. It is an especially picturesque site with many open-air cafes and restaurants along the bank. Agios Nikolaos is an ideal place for all sorts of water sports. For the athlete and the sports fan and those who want to combine vacations and sports, there are several organized gyms, the national stadium, the national swimming pool, basket and volleyball courts, tennis courts and a well-equipped riding school. Thanks to the beautiful coasts, the great sights and the cosmopolitan life, this lively city host every year thousands of visitors without losing one bit of its tranquillity and traditional hospitality. Elounda is situated 7 km from Agios Nikolaos. Many years ago, Elounda was a small fishing village. Its community is made up of five villages, of which the only Schisma is located next to the sea. A few years ago large, luxury hotel complexes were built, transforming the region into one of the island's major tourist attractions. Today apart from the luxurious hotels, there is a large number of taverns and restaurants with Greek or international cuisine and numerous coffee shops by the harbour as well as discos and music bars. For your shopping, there is a good selection of shops and last but not least there is a wonderful sandy beach offering water sports facilities. Elounda is the top place of Crete's tourist traffic, hosting some of the world's rich and famous. At the entrance of Elounda bay is the small island Spinalonga, with a Venetian fortress which was built in 1579 and seized in 1715.
Elounda - Agios Nikolaos area has many beaches where you can find lots of organised sea sports including sea diving. Also in many hotels, you will find sports campus and in those on the beach sea sports.
Agios Nikolaos was settled in the late Bronze Age by Dorian occupants of Lato, at a time when the security of the Lato hillfort became a lesser concern and easy access to the harbour at Agios Nikolaos became more important.
The name Agios Nikolaos means Saint Nicholas. Its stress lies on the second syllable of the word "Nikolaos". Agios Nikolaos or Ayios Nikolaos is a common place name in Greece and Cyprus since Saint Nicholas is the patron saint of sailors and of all of Greece.
Near the town, there's an archaeological site of ancient Priniatikos Pyrgos. It appears to have been first settled in the Final Neolithic, circa 3000 BC. Activity on the site continued throughout the Minoan Bronze Age and the Classical Greek and Roman periods, spanning a total of up to 4,000 years. Since 2007, Priniatikos Pyrgos has been undergoing excavation by an international team under the auspices of the Irish Institute of Hellenic Studies at Athens.
The earliest recorded settlement at Elounda was the ancient Greek city of Olous, whose people were in intermittent conflict with the citizens of Dorian Lato until a peace treaty was eventually reached.[3] Elounda has a later history as part of the Venetian era. Elounda has changed considerably during its lifespan. The bulk of the ancient city of Olous was reclaimed by the sea towards the end of the Ancient Greek period and is still visible, in part, when diving in the bay of Elounda.
During the early 1900s, Elounda acted as a stopping off point for lepers being transported to the leper colony at Spinalonga.
Lots of bars and night clubs all over the area, in and out of the hotels, give you the opportunity to enjoy this famous island.