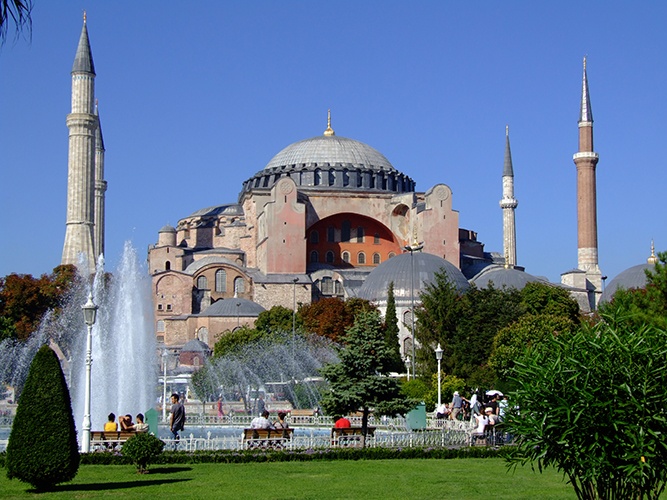 The city An enchanting blend of Eastern and Western culture, a vibrant, modern city, with a unique identity. That is Istanbul,  a city which everyone should visit at least once in their lifetime. Istanbul is Turkey's  cultural and business centre. It is set in a stunning location, surrounded by water, which is the narrow strait of the Bosporus and the serene sea of Marmara separating Europe from Asia. Istanbul has a foot in each, celebrating the best of both heritages. As Byzantium, Constantinople and finally, Istanbul, it has been the capital of three Empires, each leaving their mark in the form of stunning palaces, castles, mosques, churches and monuments. The legacy of its chequered past can be seen in every turn of the modern city. The Bosporus divides the city into the European and Asian sides, linked by two magnificent bridges, spanning the continents, the first of which was opened in 1973. All visitors to the city must take part of a Bosporus tour, on a boat which zigzags from side to side, to take in the best of each. The European side, however, is also divided in two by the Golden Horn or Haliç, which roughly divides the historic part of old Istanbul, encompassing the areas of, Sultanahmet and Laleli, from the modern city. It is crossed by a number of bridges, the most famous of which is the  Galata  Bridge. Istanbul's most famous sites are:  The Blue Mosque, Aya Sofya (Hagia Sophia), Topkapı Sarayı (Palace) and the Grand Bazaar  - are all within a 30-minute walk of each other. It is easy to get around on foot or by making use of the tram, which provides a regular service on the pedestrianised main street. Some of Istanbul's finest, most luxurious hotels are located on the Bosporus with stunning views over the straits, or in the modern business districts. There are also some historic establishments in the area known as Pera, which blossomed at the turn of the last century. The heart of modern Istanbul is Taksim Square and the streets around. The advantage of staying here is that in the evenings you have a wealth of restaurants and relaxed bars within an easy walk of your hotel. There are a couple of handy trams - one in the old town, and the other in the main shopping street in Pera, Istiklal Caddesi. Taxis are plentiful and relatively cheap. Most tour operators can arrange tours to see the main sights. The Bosphorus Some of Istanbul's finest vistas are to be seen from the Bosphorus. If you have the time it is well worth spending at least half a day viewing the sights and savouring the atmosphere. You can take a guided tour on a small boat doing the full round trip as far as Anadolu Kavağı, the nearest village to the Black Sea on the Asian side, and back to Eminönü. It is a charming place, known for its fish restaurants, and the walk up to the ruined fortress overlooking the village is well worth it for the stunning views. As you leave from Eminönü you can benefit from some beautiful views back towards the old town with its evocative skyline of turreted roofs and minarets. As you head towards the Black Sea you will pass the Dolmabahçe Palace, Beylerbeyi Palace and the 15th-century fortresses built by Mehmet II, Rumeli Hisarı and Anadolu Hisarı. Also look out for the stunning wooden Ottoman mansions, many of which have been renovated and form some of the city's most desirable residences. The Princes Islands Those who are staying for a little longer in Istanbul should really set aside a day to visit these charming islands in the sea of Marmara, just off the coast of Istanbul. The picturesque scenery of wooded hills, charming beaches and authentic Ottoman mansions, combined with the tranquil atmosphere, make for a pleasant contrast to the city itself. Easily reached by ferry or hydrofoil, the ambience of the islands seems worlds away. Büyük Ada, or "Big Island" is the most popular with visitors. No cars are allowed but you can take a trip in a horse and carriage to visit the Monastery of St. George.

per person€0.00
Cappadocia Istanbul vacation package. Cappadocia full-day tour and Istanbul full day city tour and a half-day cruise to Bosphorus and all this in 6 days.
BOOK NOW

per person€0.00
Ephesus Kusadasi Cappadocia Istanbul. 8 days full of experiences with full-day tours in Cappadocia, Ephesus and Istanbul. Admire the full area of Cappadocia with all the land formations and the ancient and Roman antiquities in the area of Ephesus. Enjoy a full day of Istanbul tours and see all the Byzantine and Othoman buildings and a half-day Bosphorus cruise.
BOOK NOW

per person€0.00
Istanbul Ankara Cappadocia Ephesus Troy Vacation Package  in 11 days covers the most important places of Turkey.  Istanbul Ankara Cappadocia Konya Pamukkale Ephesus Troy are some of the places. Taste of Istanbul, visit the Museum of Anatolian Civilizations and the Mausoleum of Kemal Ataturk in Ankara. Visit the famous Cappadocia, Pamukkale, Kusadasi with the famous Ephesus and Canakkale with the ancient Troy
BOOK NOW

per person€0.00
Istanbul Ephesus Kusadası Cappadocia Pamukkale. A vacation package that covers the most important places of Turkey in only 8 days
BOOK NOW

per person€0.00
Istanbul City Break Vacation package for 4 days offering 2 full day tours in the city and on Bosphorus. Good opportunity to discover the city and promise to come back for a longer time.
BOOK NOW

per person€0.00
Istanbul Cappadocia Ephesus Kusadası 7 days A perfect combination of Istanbul, Cappadocia and Ephesus. Admire the famous Istanbul monuments,  the famous Cappadocia area and then Kusadası, Ephesus and  the House of Virgin Mary
BOOK NOW