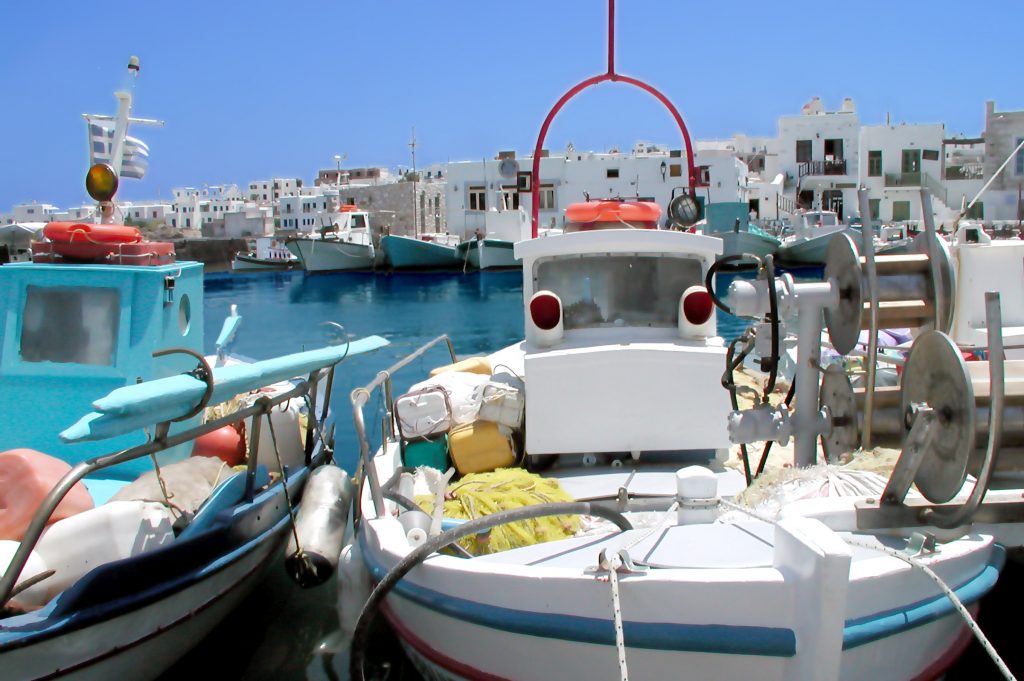 Paros Travel Guide gives you handy information on the city and the interesting things you can do in and around, like organised tours and cruises, vacation packages and short walks.

Paros has been inhabited since the ancient times. It was one of the centres of the Cycladic civilisation and numerous findings from various sites on the island, are displayed in the National Archaeological Museum in Athens.
The third largest island of the Cyclades in the recent years it has been developed into a modern tourist centre. The landscape of the island that conceals the famous Parian marble, is adorned by gently rolling hills with vineyards, ending near the coastline providing sandy bays.
The main port of Paros is Parikia with two archaeological sites and a famous Byzantine church of Virgin Mary. The second village of the island is Naousa with the well-known yacht harbour and nice hotels and restaurants in the greater area. Beautiful beaches, like Kcolymvithres near Naousa, extraordinary landscape and archaeological sites make the puzzle of Paros that will attract the interest of any visitor and give him a good excuse for returning back.
Mediterranean food in nice restaurants and taverns combined with good service and wide smile in the welcome will satisfy all the tastes. Not to forget the good local and imported from other Greek places wines, to make the gastronomy satisfaction complete.
Near Paros, separated by a narrow sea channel with a width of 1 nautical mile, is Anti-Paros, unique for its golden sandy beaches and unspoilt natural beauty. An important attraction of Antiparos is the spectacular Grotto, which is situated on the Agios Ioannis hill, along with the little church of Agios Ioannis at its entrance.

Paros has many beaches where you can find lots of organised sea sports including sea diving. Also in many hotels, you will find sports campus and in those on the beach sea sports.
The story that Paros of Parrhasia colonised the island with Arcadians is an etymological fiction of the type that abounds in Greek legend. Ancient names of the island are said to have been Plateia (or Pactia), Demetrias, Strongyli (meaning round, due to the round shape of the island), Hyria, Hyleessa, Minoa and Cabarnis. In 1204, the soldiers of the Fourth Crusade seized Constantinople and overthrew the Byzantine Empire. Although a residual Byzantine state known as the Empire of Nicaea survived the Crusader onslaught and eventually recovered Constantinople (1261), many of the original Byzantine territories, including Paros, were lost permanently to the crusading powers. Parian marble, which is white and translucent (semi-transparent), with a coarse grain and a very beautiful texture, was the chief source of wealth for the island. The celebrated marble quarries lie on the northern side of the mountain anciently known as Marathi (afterwards Capresso), a little below a former convent of St Mina. The marble, which was exported from the 6th century BC onwards, was used by Praxiteles and other great Greek sculptors. It was obtained by means of subterranean quarries driven horizontally or at a descending angle into the rock.
Lots of bars and nightclubs all over the island, in and out of the hotels, give you the opportunity to enjoy this famous island. Parikia, the capital of the island has many nice restaurants and bars, but in Naousa there are also lots of them.